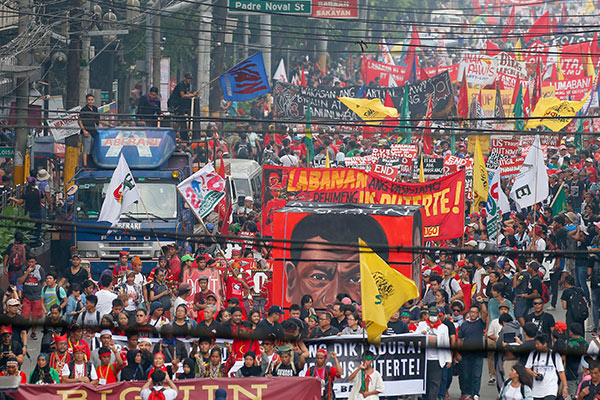 “The videos intend to inspire transnational solidarities and dialogue between the Filipino diaspora and grassroots movements in the Philippines,” said Cardenas.

The five-part series tackles urgent issues including the Philippine President’s brutal “war on drugs”, rising authoritarian rule, police brutality, the declaration of Martial Law and environmental disasters. The videos will focus on the perspective of activists, civil society organizations, indigenous groups and artists to draw attention to what it takes to deal with these disasters on the ground and how transnational networks can help.

The first video of the series featured Suyin Jamoralin, the Executive Director of the Citizen Disaster Response Centre (CDRC) about community-based approaches to disasters. In the video, Jamoralin talks about the CDRC’s work in response to Martial Law, the ongoing battle between the Philippine Army and a local terrorist group in Marawi and the aftermath of recent typhoons.

“The CDRC has a strong tradition of responding to and critically reframing disasters in the Philippines to address the root of peoples’ vulnerabilities,” said Go. “Their commitment to responding to a range of urgent needs across the country has allowed them a strong understanding of what is happening on the ground.”

Cardenas, Chanco and Go put together the Kutitap series as part of their work with the Alitaptap Collective, a group of Filipino graduate scholars working with the Alternative Transnational Economies Project based at YCAR.  The Collective was formed with the specific aim of mobilizing critical public scholarship on the Philippines through non-academic platforms such as investigative journalism, collaborations with grassroots initiatives and transnational solidarity work.

“We hope that Kutitap will serve as a proof-of-concept for a different mode of engagement between Filipino scholars in the west and frontline responders,” said Chanco. “Our larger goal is to encourage more meaningful connections between the Filipino diaspora and those working in the Philippines to build effective transnational solidarities.”

The second video of the series will feature Respond and Break the Silence Against the Killings (RESBAK), an artist alliance based in the Philippines working to draw attention to extrajudicial killings. It is set to be launched in October 2017.

The Kutitap series is supported by the York Centre for Asian Research and faculty advisor, Philip Kelly (Geography), and is edited by Alex Felipe.

View the series at: https://alitaptapcollective.wordpress.com/category/kutitap-video-podcasts/

Asia Research Brief #42 | “Playing Out of Bounds”: Identity and community-building on and off the court

In memory of our colleague Lisa Drummond