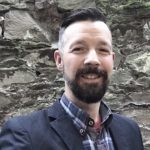 Dr McGuire earned his Ph.D. in Ethnomusicology from the Department of Music at York University and also received a Graduate Diploma in Asian Studies from YCAR. His research area is martial arts music, and he has focused on the percussion used by Chinese kung fu and lion dance groups. Fieldwork has included long-term participant-observation and performance ethnography at Toronto’s Hong Luck Kung Fu Club, as well as comparative study in Hong Kong. This research investigates how the transmission process builds discourses of Chinese identity, heroic qualities, and resistance to oppression into martial arts training, which are then embodied in percussion-accompanied kung fu and lion dance performances. He also uses music to analyze the rhythm of combat. McGuire’s work deals with music in situations where it is not the main focus, thus suggesting approaches to studying musical accompaniment as embedded in ritual and/or in other movement practices. Further research interests include kung fu as an intertextual discourse, which connects ethnographic work with analysis and interpretation of how Chinese martial arts are represented in music, film, and literature. The multiple and often contested meanings of kung fu as culture are thus connected to both everyday practice and broader social phenomena, especially various forms of agency in the face of hegemony. McGuire also has an MA in Electroacoustic Composition from York and has worked professionally as a composer, DJ/producer and sound engineer.

“The Rhythm of Combat: Understanding the Role of Music in Performances of Traditional Chinese Martial Arts and Lion Dance.” MUSICultures 42 (1): 1–23. 2015.