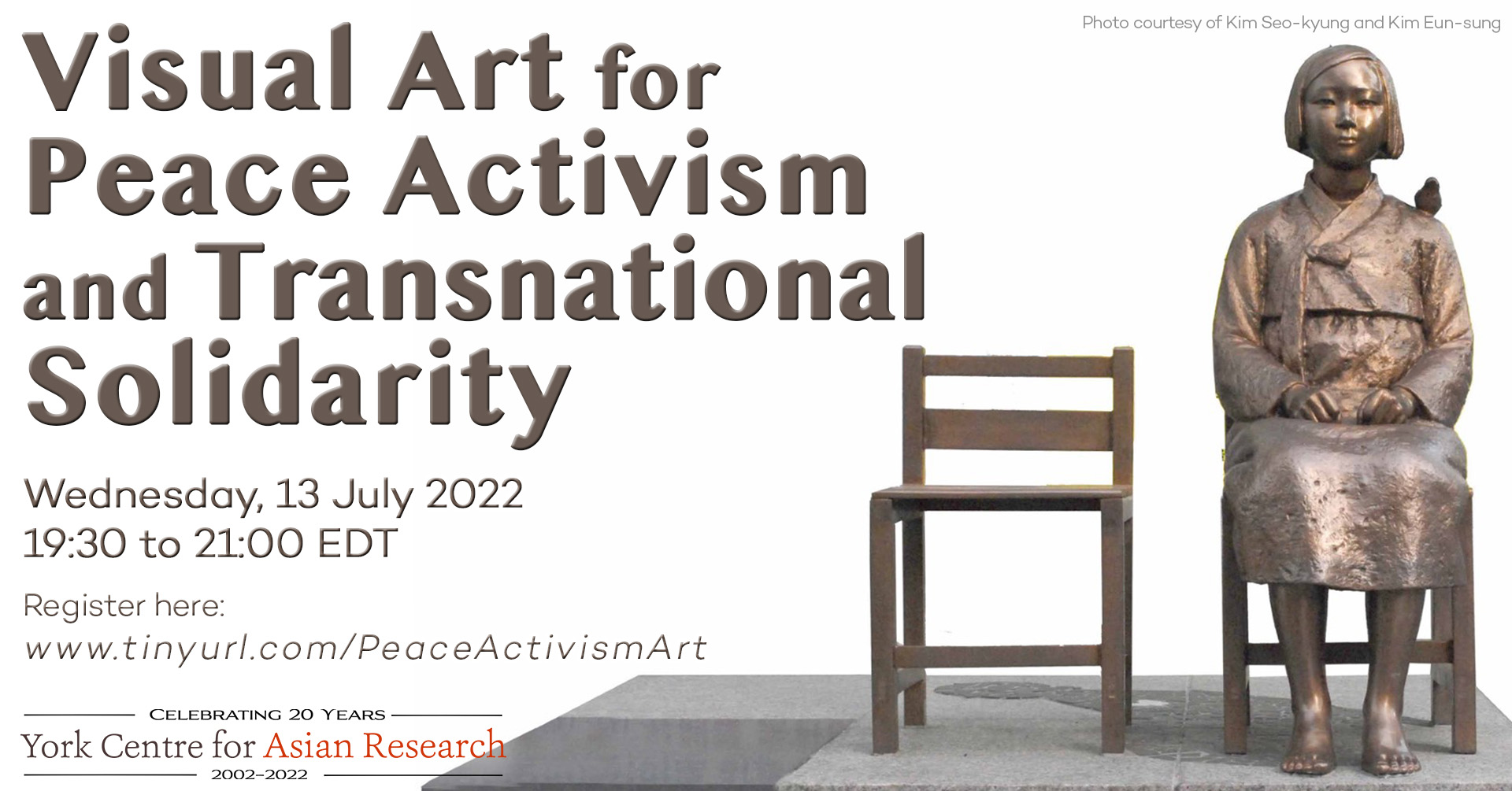 South Korean artists Kim Seo-kyung and Kim Eun-sung began their activism against military sexual violence as they serendipitously witnessed the Wednesday Demonstration­—a weekly protest held by victims and activists across the street from the Japanese embassy in Seoul since 1992, calling for the Japanese government to apologize for its use of military sexual slavery of Korean women during the colonial period (1910–45). Kim and Kim created the Statue of the Girl of Peace (Pyeonghwaui Sonyeosang) to embody the lives of the “comfort women” during wartime and the postwar period, the history of their struggles since 1991, when they first came forward, and their aspiration for peace. They installed their statues within and outside of Korea, in collaboration with Korean communities abroad, including the one at the Korean Canadian Cultural Association in Toronto, generating empathy and controversies among the local and global communities.

Art historian Dr. Vicki Sung-yeon Kwon will present their two sculpture series in the context of the transnational conflicts between Japan, South Korea and Vietnam over wartime atrocities: The Girl of Peace statue and Vietnam Pieta. First installed in Seoul, in 2011, The Girl of Peace statue became a symbol of the Korean victims of military sexual violence of the Japanese colonial period. Vietnam Pieta (2015) was created as a message of apology for the Vietnamese victims of civilian massacres and sexual violence committed by South Korean soldiers during the Vietnam War. She will discuss the roles that these statues played in the grassroots activism and discourses of official apology over colonial and wartime atrocities. Her presentation will be followed by the artists’ talk on how their works embody their life and aspirations and how they promote historical justice and peace through visual art.

The artists, who witnessed the military dictatorship in the 1980s in South Korea, participated in the democratization movement and documented the concealed history and social injustice in their artworks. They seek to represent fragmented aspects of lives and feelings of empathy in the creation of art.

Dr. Vicki Sung-yeon Kwon is a Korean immigrant in Canada, living and working in the territory of the First Peoples of Canada. Kwon’s research explores modern and contemporary art in East Asia in relation to transnationalism and feminism. Her doctoral research examined socially engaged art in Korea and Japan, focusing on representation of migrant workers, victims of wartime atrocities, and ethnic minorities in post-disaster communities. As curator, coordinator, and researcher, Kwon has participated in exhibitions held in Canada, Norway, South Korea, and Switzerland. Her works were published in the journals Korean Studies, Inter-Asia Cultural Studies, Asian Studies Review, and Imaginations. Currently, she is a postdoctoral fellow at the Kyujanggak Institute for Korean Studies at Seoul National University.

This talk is presented by the York Centre for Asian Research, and will be moderated by Dr. Hong Kal, Department of Visual Art and Art History, York University.