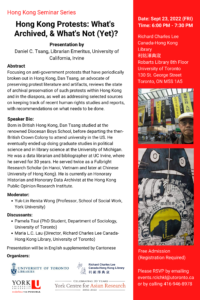 Focusing on anti-government protests that have periodically broken out in Hong Kong, Dan Tsang, an advocate of preserving protest literature and artifacts, reviews the state of archival preservation of such protests within Hong Kong and in the diaspora as well as addressing selected sources on keeping track of recent human rights studies and reports, with recommendation on what needs to be done.

Born in British Hong Kong, Dan Tsang studied at the renowned Diocesan Boys School, before departing the then-British Crown Colony to attend university in the US. He eventually ended up doing graduate studies in political science and in library science at the University of Michigan. He was a data librarian and bibliographer at UC Irvine, where he served for 30 years. He served twice as a Fulbright Research Scholar (in Hanoi, Vietnam and later at Chinese University of Hong Kong). He is currently an Honorary Historian and Honorary Data Archivist at the Hong Kong Public Opinion Research Institute.

Presentation will be in English supplemented by Cantonese.

YCAR is a co-presenter of this event.