Canada and China: A Fifty-Year Journey 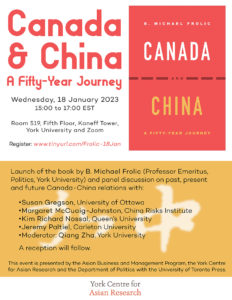 Launch of the book by B. Michael Frolic (Professor Emeritus, Politics, York University) and panel discussion on past, present and future Canada-China relations with: 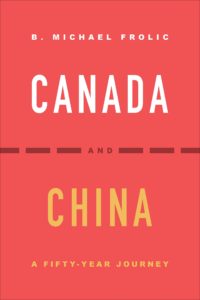 Presenting a thorough record of Canada’s diplomatic ties with China, Canada and China recounts ten stories regarding China policy decisions made by the Canadian government. These decisions describe key bilateral moves, beginning with Pierre Trudeau’s recognition of China in 1970 and ending fifty years later with his son Justin’s attempt to reset a struggling relationship with China.

Rooted in archival research, extensive interviews, and Professor Frolic’s experience as a policy observer, the book contributes to our understanding of how the Canada-China relationship has developed over time and how best to position Canada in future relations with China.

This event is presented by the Asian Business and Management Programme and the York Centre for Asian Research with the University of Toronto Press.

Susan Gregson served in the Canadian public service with distinction for 35 years, occupying several senior executive positions. Between 2013 and 2016, she was Assistant Deputy Minister for Asia Pacific at Global Affairs Canada. Prior to her last assignment, she served as Assistant Deputy Minister for Human Resources, Director General of Assignments and Executive Management, Director General, Regional Strategies, World Markets Branch, and Director, Human Rights, Humanitarian Affairs and International Women’s Equality Division, all in the Canadian Department of Foreign Affairs and International Trade. Susan has also represented Canada abroad. Her most noteworthy assignments were as Deputy High Commissioner in London, Consul General of Canada in Shanghai and Minister-Counsellor at the Canadian Embassy in Beijing. She holds a B.A. in anthropology from the University of British Columbia and was Canada-China Scholar at Nankai University and at Fudan University.

Margaret worked in the Canadian public service for 37 years in science and technology policy, programs and funding, and served at the Assistant Deputy Minister level at Department of Finance, Natural Resources Canada and the Natural Sciences and Engineering Research Council.  She has held management positions at Industry Canada, the Prime Minister’s National Advisory Board on S&T, the Ministry of State for Science and Technology, and the Privy Council Office.  For the last seven years of her government career, Margaret was a member of the Canada-China Joint Committee on Science and Technology.   Margaret holds an MA in International Relations focused on China, and an Honours BA in Political Economy.

Kim Richard Nossal is emeritus professor of political studies in the Centre for International and Defence Policy at Queen’s University. He received his BA, MA, and PhD from the University of Toronto and In 1976 he joined the Department of Political Science at McMaster University. In 2001, he  was appointed to head the Department of Political Studies at Queen’s University, a position he held until 2009. He was the Sir Edward Peacock Professor in International Relations from 2008 to 2013, served as the director of the Centre for International and Defence Policy (2011–2013 and 2018–2019), and as director of the Queen’s School of Policy Studies from 2013 to 2015. He retired in 2020.

He was the editor of International Journal, the quarterly of the Canadian International Council, Canada’s institute of international affairs, from 1992 to 1997 and served as president of the Canadian Political Science Association in 2005–2006. In 2000, he was appointed by Canada’s minister of national defence to the academic selection committee of the Security and Defence Forum, the academic outreach program of the Department of National Defence. From 2006 until 2012, he was chair of the committee. He was awarded an honorary degree by the Royal Military College of Canada in 2017 and was elected as a Fellow of the Royal Society of Canada in 2019.

He is the author of a number of works on Canadian foreign and defence policy, including The Politics of Canadian Foreign Policy, originally published in 1985. The latest edition, now co-authored with Stéphane Roussel and Stéphane Paquin, will be published in French in 2023. His most recent books are Charlie Foxtrot: Fixing Defence Procurement in Canada (2016) and The Politics of War: Canada’s Afghanistan Mission, 2001–14, co-authored with Jean-Christophe Boucher (2017).

Jeremy Paltiel is Emeritus Professor of political science at Carleton University in Ottawa. He received his BA in East Asian Studies from the University of Toronto in 1974; diploma in Philosophy from Beijing University in 1976 MA (1979) and his PhD (1984) in political science from the University of California, Berkeley. He is the author of The Empire’s New Clothes: Cultural Particularism and Universality in China’s Rise to Global Status (Palgrave, 2007) This year he coedited Canada and Great Power Competition: Canada Among Nations 2021 with David Carment and Laura Macdonald while contributing a chapter on “How Canada Became Hostage to Sino-American Rivalry in the Affair of Meng Wanzhou and the ‘Two Michaels’.” Last year he published “Between Two Orders in the Asia Pacific Navigating a Treacherous Reef” in Lowell Dittmer ed.  The New Asian Disorder (Hong Kong University Press, 2022). In 2018 he published “Facing China: Canada Between Fear and Hope” (International Journal 73(3). In 2016 published a co-edited volume with Huhua Cao, Facing China as a New Global Superpower: Domestic and International Dynamics from a Multidisciplinary Angle published by Springer. He also coedited a special issue of Canadian Foreign Policy on Canada and emerging Markets with Laura Macdonald. and “China and the Six-Party Talks” (2007), “Mencius and World Order Theories” (2010), “China’s Regionalization Policies: Illiberal internationalism or Neo-Mencian Benevolence?” (2009). He has authored numerous other articles on Chinese politics, human rights and the Chinese tradition, civil-military relations in China, East Asian foreign relations and Sino-Canadian relations and has made frequent media presentations.