For Zoom attendees, register at: www.tinyurl.com/Burma-14Oct 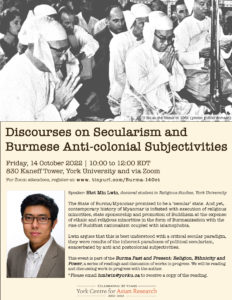 Not only in the founding constitution in 1947 but also the 1974, 2008 constitutions and the revolutionary federal democracy charter of the present day, the State of Burma/Myanmar promised to be a ‘secular’ state. And yet, contemporary history of Myanmar is infested with execution of religious minorities, state sponsorship and promotion of Buddhism at the expense of ethnic and religious minorities in the form of Burmanization with the rise of Buddhist nationalism coupled with islamophobia. With a closer examination of the discursive contestations around the issue, this paper argues above-mentioned phenomena are best understood with a critical secular paradigm; instead of viewing them as politically motivated state policies driven by strong and charismatic personalities such as U Nu and Daw Aung San Suu Kyi, they were results of the inherent paradoxes of political secularism, exacerbated by anti and postcolonial subjectivities, i.e. specific epistemological, political and moral figurations in an interplay with the modern secular project in its efforts to define religion and thus harden religious difference which ultimately exacerbates executions of religious minorities by the state.

This event is part of the Burma Past and Present: Religion, Ethnicity and Power, a series of readings and discussion of works in progress. We will be reading and discussing work in progress with the author. Please email hmlwin@yorku.ca to receive a copy of the reading.