Book Talk | Caste Question in the Politics of West Bengal: Some Reflections 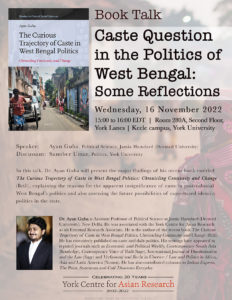 The politics of West Bengal unlike other parts of India has remained relatively free from large scale caste-based political mobilization. The apparent invisibility of caste in West Bengal politics has remained an enigma. Yet caste question in West Bengal politics has remained under-researched. However, there has been a growing interest in the politics of caste in West Bengal in recent years and this interest has grown due to the end of the world’s longest serving democratically elected Communist government (1977-2011) that followed a class centric non-identitarian politics. The decline of the Left has also coincided with the political assertion of the Matua-Namasudra community, giving rise to the anticipation about the rise of “a new politics of caste” in the state. In this talk Dr.  Ayan Guha will present the major findings of his recent book entitled The Curious Trajectory of Caste in West Bengal Politics: Chronicling Continuity and Change (Brill) explaining the reasons for the apparent insignificance of caste in post-colonial West Bengal’s politics and also assessing the future possibilities of caste-based identity politics in the state.

Dr. Ayan Guha is Assistant Professor of Political Science at Jamia Hamdard (Deemed University), New Delhi. He was associated with the York Centre for Asian Research (YCAR), York University, Toronto as an External Research Associate. He is the author of the recent book The Curious Trajectory of Caste in West Bengal Politics: Chronicling Continuity and Change (Brill). He has extensively published on caste and dalit politics. His writings have appeared in reputed journals such as Economic and Political Weekly, Contemporary South Asia (Routledge), Contemporary Voice of Dalit (Sage), International Journal of Discrimination and the Law (Sage) and Verfassung und Recht in Übersee / Law and Politics in Africa, Asia and Latin America (Nomos). He has also contributed columns to Indian Express, The Print, Statesman and Café Dissensus Everyday.